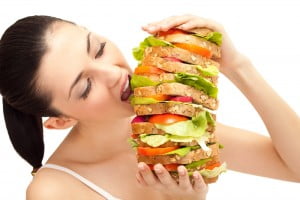 Leptin is the King of hormones, the commander and chief of virtually everything that takes place in your body.  It is the single most important hormone when it comes to understanding why we feel hungry or full.

When present in high levels, it signals our brain that we’re full and can stop eating.  When it is  low, we feel hungry and crave food. Understanding how leptin works and applying that information to your day to day life can totally change your health.

Leptin acts like a traffic cop in your brain & when levels are adequate the speed limit is raised and your metabolism can run faster. When Leptin levels are too low your brain thinks there is a famine and your metabolic rate is set to hibernation mode so that you don’t perish from malnutrition. Your subconscious brain has no idea that there is food on every corner.

The Discovery of Leptin

This is an interesting story itself. Back in 1994 scientists at the Rockefeller University were able to show that a particular strain of obese mice lacked a gene that prevented them from making an important hormone, which they later named leptin. Lacking this gene the mice had no control over their body weight or feeding behaviour.

The science community thought this would be the greatest weight loss discovery of all time. And in many ways say that it is, but not in terms of giving drugs to people. This is because only a handful of people are like the mice that are unable to make leptin at all.

99.99% of the overweight population make way to much leptin from their extra pounds of fat!

All this extra leptin actually clogs leptin function, sort of like a traffic jam.  And, it induces a problem called leptin resistance.  Which means that even though there is far too much leptin, it isn’t getting into your brain correctly and thus your brain is behaving just like the mice that don’t make any leptin at all.

You have leptin resistance, if

Since Leptin is controlling the rate your body makes energy, and since energy is needed by everything in your body to do anything, leptin issues are core to survival and your health. This is why leptin is so powerful.

If you love to eat, you have a leptin problem. If you eat to live, you are likely in much better control of it.

Like Insulin, Leptin is a weight loss hormone produced in the fat of the body and tells you when you have eaten enough or when you are hungry. Research has shown that some people do not always get the message that they have had enough to eat and their bodies secrete more leptin. This causes food cravings and overeating.

Leptin and Its Functions

It is a protein composed of 167 amino acids primarily secreted by adipocytes. It is also secreted in small amounts by epithelial cells in the stomach and placenta. Leptin and its effects were first studied in Jackson laboratory in 1950 in a mouse colony which stemmed random genetically obese mice that intake food in voracious quantity.

Leptin level provides the body an indication of its nutrition level. When adequate amount of fat occurs, the adipose tissues secrete leptin into the blood stream. This has multiple effects countering appetite. Primarily, leptin counteract with Neuropeptide Y, a hypothalamic polypeptide that induces craving for carbohydrates.

Mutation of leptin or leptin receptors in the hypothalamus halts this feedback mechanism inciting disorderly eating and obesity. Other leptin ramifications include the stimulation of production of α-MSH, another appetite suppressant and inhibition of anandamide, another hunger stimulant. These responses of body to the leptin hormone nicknamed it, the obesity hormone. In fact, leptin secretion is more responsive to starvation than obesity.

Obesity and eating disorders can be fixed with the stabilization of leptin imbalance. When looking in leptin resistance, the major causes include sleep deprivation, high stress, absence of exercise and over-intake of carbohydrates. To fix leptine resistance it is suggested to counteract to each of these causes. Consumption of healthy low carb food is a good starter.

Well established leptin diet has a proportion of 40% fat, 30% protein and 30% carbohydrates. Avoid sources of carbs such as refined sugar and fructose as they can stimulate insulin in high level and thereby have an adverse effect in leptin response. Stop disorderly consumption of food. And getting good sleep and exercise will complete the circle.

How to reverse leptin resistance?

For genetically obese persons normal fixation of leptin resistance may not pay off and thus may require supplements. Supplements are also prescribed to recently weight losed individuals to maintain the hormone balance and to prevent from regaining weight.

At any rate you obviously can’t give a leptin drug to someone who already has too much leptin – a problem that continues to baffle those who are looking for the next pharmaceutical blockbuster weight loss drug.  Now  the only way to get a handle on this problem is to learn the in’s and out’s of leptin and eat to be in harmony with the hormone.

It’s unfortunate but our bodies came without an owner’s manual and most of your trial and error regarding dieting is error. Well, it’s time for you to learn to be in charge, there is a right way to live in harmony with leptin.

The downsides of these medications are significant side effects including high blood pressure, head ache, dry mouth and constipation. And some of the supplements have abusive nature. Medications having tolerable side effects can cause 10% of weight loss and should be used in combination with dietary and exercise therapy. Effective leptin replacement surgeries are still under final stages of experimentation. [Also read this article]